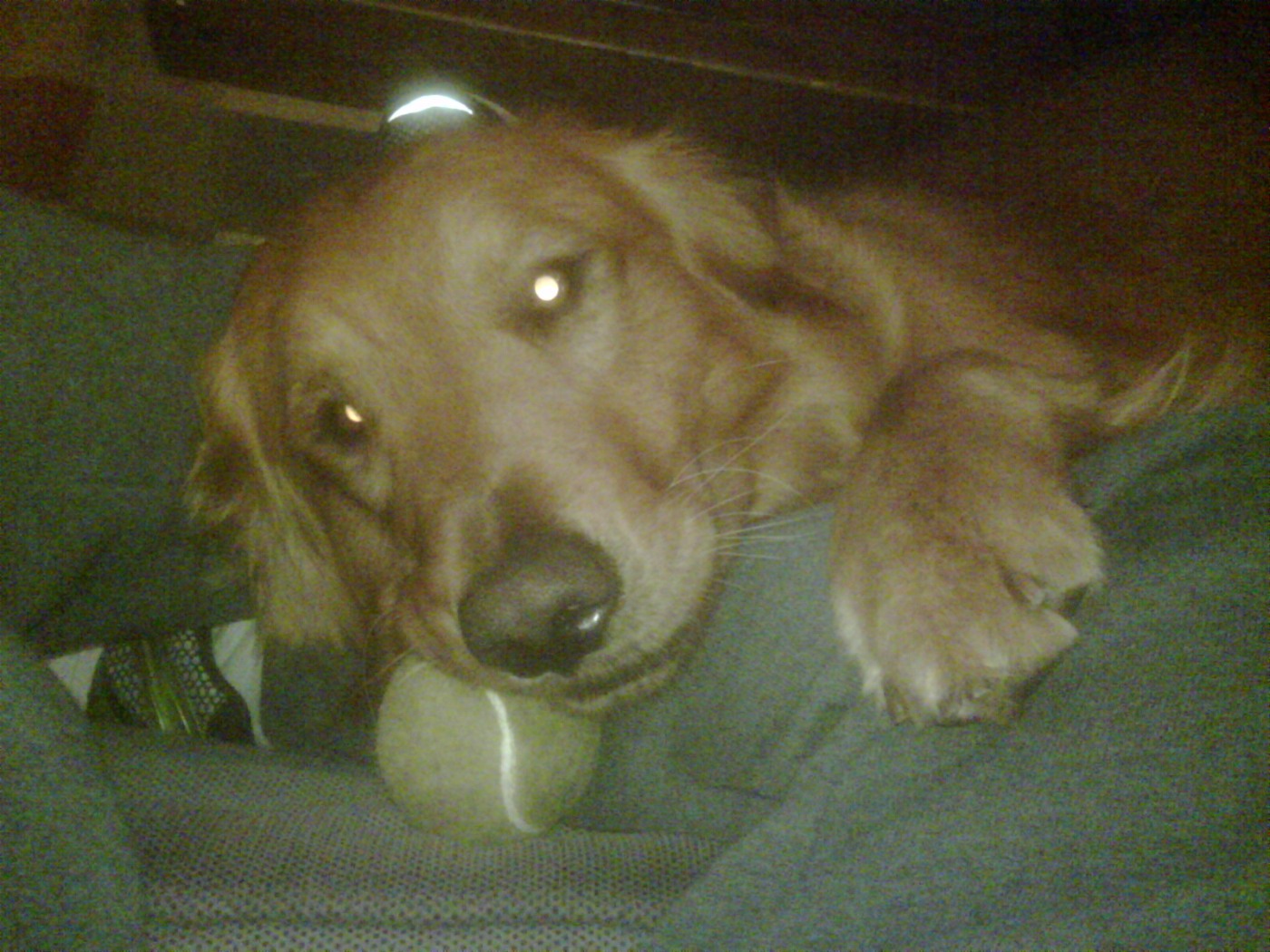 In Praise of the Golden Retriever, Best Dog of All

When I was a young(er) man, I had a four-word concept of what a perfect life would be. Or, at least the end of a perfect day.

(I also had the notion that my perfect house would start by building it around a hot tub. So consider younger me, as a prognosticator, hit or miss.

But I think I had this one pretty accurate.)

I’ve gotta say: I’ve been fortunate enough to spend the ends of a lot of perfect and not-so-perfect days in that perfect way: me, relaxing on a deck (or porch, or patio — I’m not really picky), with a beer in hand and the world’s best, most loyal buddy at my feet.

That would be Macallan. Wonder dog. Tennis ball savant. Best bud to boys and girls and just about any beast — slow squirrels and rabbits notwithstanding.

Now, I somehow made it a full 10 years without picking up a pup of my own. After getting to know just how special a pet and companion the golden retriever is, in particular, after growing up with a golden, aptly named Chase for all the action he brought to any occasion on and off the leash, and then getting to know my parents’ new pup, Summer, and loving how she shifted easily from fetching to running to cuddling and lounging, inside or out.

From 2001 through early 2011, I even called my girfriend’s — and soon, wife’s — cat Lucy a household companion. Lucy seemed, eventually, to me more doglike than catlike. With her talkative meows and dependence on lap time and proclivity to fetch rolling milk rings and wayward catnip pandas. But by that spring of 2011, I was obsessed. Man, I was gonna make it happen. And like most productive obsessions, my wife gave my quest her blessing.

And so we quickly moved from a temporary search for a suitable Lab — close second, in my opinion, to the untouchable status of golden retriever as best of all breeds — to the right and true and only path: the one that would bring a golden of our own home.

Make way for Macallan, best of all dogs. At least — acknowledge — better than any of yours.

Here’s a shortlist that proves, conclusively, why.

Duh. Goldens are simply the best blend of active and sporty with sociable and cuddly there ever was and ever will be.

Bred to be the perfect errand boys and girls on a hunt, they have soft mouths and big paws and attentive, moldable minds. They’re tireless, when it comes to going after and after and after and after and after and after tennis balls, frisbees, stuffed animals, what-have-you. Until you want to stretch out by the fire or dinner table or in your favorite arm chair and they carefully and irresistibly place that perfect, diamond head in your lap and cast those big, droopy brown eyes up at you.

A golden isn’t too big, at 55 to 70 pounds (unless you’ve got an oddball or overfed outlier), but is never to be mistaken for what my father-in-law memorably termed a “punt dog” either. Sure, they shed a bit of that fluff, but it appears like spun, caramel cotton candy and vacuums up easy enough.

Their tails are hazards, since they always seem to be wagging and thumping. But hey, you intended to put your breakables up high anyway, didn’t you?

Always ready for a run or walk, ever eager to please, hands-down, my dog is better than yours. 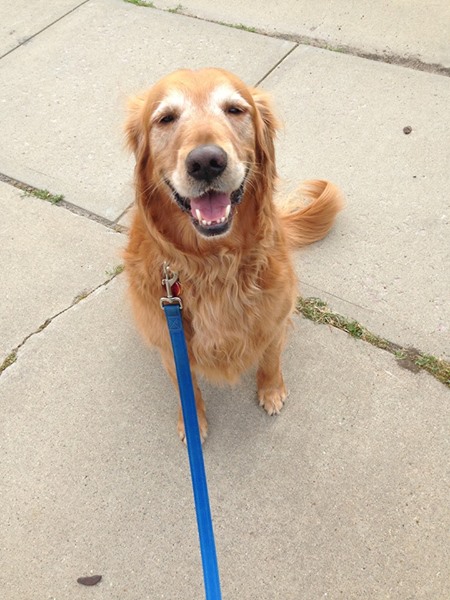 Goldens as puppies are like pawed electrons, whipping and zipping all about, encountering no toe they won’t nibble, no hips they won’t attempt to scrabble up and climb.

They’ve got an inherent prey drive, which means they consider it their mission to, say, tidy up the house or yard of your cats and other small animals.

And, yeah… you get the nefarious human breeders out there and general abusive face-pokers that have given some specimens of the breed a bad name as of late on the bitelist.

But not my pup, best of all there is and ever was.

We found out in the first weekend, when my hasty plan at welcoming our new family member was smothering him with oversight and no’s and going on about sixteen walks a day, that goldens, smart as they are, will test you and outsmart you and rebel and see who really rules the roost.

So we did what every proper dog owner should do and sought out training. We were fortunate enough, in the Chicago burbs at the time, to come under the tutelage of Peggy Moran. Peggy just flat out knows her stuff, and that mostly mains training the humans. (Boy, did we need it.) She even allows you to take and retake her course till it eventually sinks in. (Like I said, she knows her stuff.) The dogs usually are much faster at picking it all up.

Proper training is essential to helping understand how your dog listens and learns. To building a trusting relationship with all family members. To setting limits. To properly socializing your pet instead of, say, having it run off after every stranger and strange animal and poor, dumb you chases after, apologizing — but let’s be serious, not exactly giving a damn since you didn’t do the basic, responsible, humane thing and frigging train the dog already.

Don’t know where we’d be without this training. Oh yeah. Without the dog that is the best that ever was. 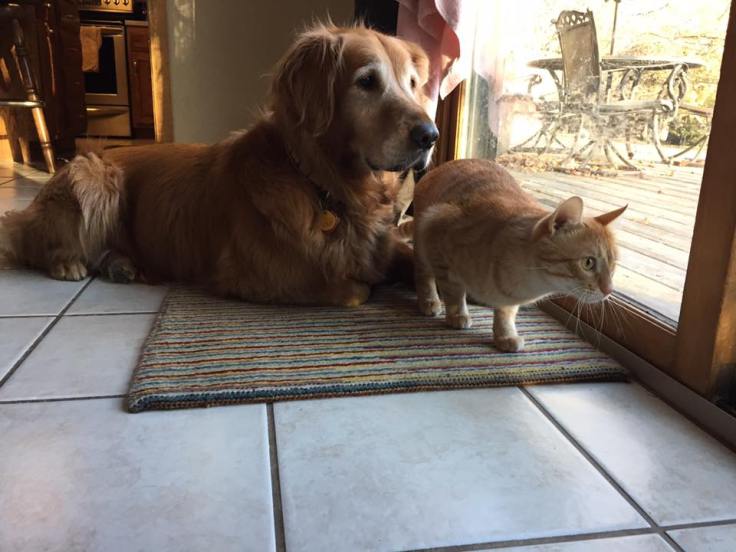 3. He’s Great with the Whole Family

OK. Admission time. That first weekend, Macallan managed to get his mouth around our 12-year-old cat for the briefest moment. Scared the smiles right off us. And got us into training (see above) faster than you can say “Scooby Snack.”

But the moment he met our young boys when we first visited him at the foster parents’ house, he fell on his back and proceeded to soak up hugs and belly rubs. He let go of the hangups we were told he had — about not entering yards, about sticking to porch — and gleefully followed our sons into the grass for fetching and jumping and that happy prance he gets at playtime.

When we left to go on our way and mull over the decision to adopt him (duh) he also broke character and followed us to the driveway for a patient sit and pet and slobbery kiss session.

There was NO WAY we weren’t bringing him home.

After our cat of 12 years died shortly after we moved to Sioux Falls, we became a one-pet household again until about five years later, when we brought home a male tabby with three years of streetwiseness under his nonexistent collar and enough sass to supposedly keep his much larger canine housemate in line. Well… that was never going to be a problem with Macallan, even after we deliberately introduced them each slowly to each other (training… duh). Macallan dutifully rolls over, and Hobbes the cat gives his head a thorough lick and wet paw cleaning.

Harmony. Another reason my dog is better than yours.

What fun would having the most versatile dog breed ever be without being able to hit the road and check out campsites, hiking trails, dog parks, the beach, the mountains?

Shortly after I hauled him home in my big (I thought) Hyundai Sonata sedan, I understood: to get maximum family time from our (then) crew of four plus golden, I would have to trade up.

The Sonata was traded in for a Hyundai Santa Fe, and the ample back space became Macallan’s domain.

We’ve taken him on enough great American excursions cross-country, including memorable multi-day drives through Kansas City and Nashville and Pittsburgh and Myrtle Beach then back to home that he absolutely expects to go along whenever the big rolling bags come out.

Last year, when the wife and I attempted to celebrate our 15-year anniversary out in the Black Hills, dropping the kids off at Nana’s house on the way, and make my wonderful mother-in-law’s task of managing three boys a bit easier without having to manage a fourth, furry boy in the process, it was heart-melting and heartbreaking at the same time to see Macallan waiting right by the door, tongue lolling happily, and to have to call him back inside after accidentally letting him out and prying his big furry butt from the backseat.

Returning home, we found he’d done to the basement what he rarely, ever, ever does: treat it like his personal poop pad, dog sitter or no.

OK, so even the best have their moments.

Whenever we leave town now he’s either coming with us, or showing on the doorstep of a friend and saint who — duh — welcomes the chance to host and love the best dog their ever was.

Better than theirs, anyway.

(Better than yours, too.)

All of the above is practically innate, as I guess I’ve proven so far, to Macallan, wonder dog of them all. If enforced by a little training, mainly of his masters.

And sure, he has his pesky tendencies.

He slobbers a mark into the top of the stairs, where he’s fond of parking himself with a tennis ball between his paws, the better to flip it in the air and try to catch it before it escapes down the stairs.

His burps and farts are without parallel.

And we could do without his occasional present inside.

But that he came to us with actual, confirmed superpowers is something that makes the awkward bumps in any relationship smooth in comparison.

Macallan has a particular trick that may have been taught to him long ago, before he made his way to us as if in a rocket from Krypton. And when we first adopted him, he seemed to do it over and over and over, as if affirming, for us slow humans, how special he is.

When he fetches, he prefers to go after not one, but two tennis balls at once. Bringing them both back in his mouth.

And when he gets to you, he rolls on his back, places a paw on either side of his head, and lifts the frontmost ball from his mouth, then hoists it high above his head, usually wagging his tail so enthusiastically he makes himself into a giant dog mop, swishing from side to side.

So there you have it. All the evidence that is required to show my dog is better than yours. And that’s just the way we like it.