I’m a toys guy. Now, before that’s taken the wrong way, let me explain what I mean.

Growing up, toys were the vehicle to endless worlds of creative expression. Down in our always chaotic basement playroom, or across the carpeted expanses of our bedrooms, my brother and I crafted epics, whether they starred our G.I. Joes, or Transformers, or Star Wars guys, or Fisher-Price, or cars, or some giddy mash-up of everything at hand.

Early on, we departed from the names some marketing department at Hasbro or Mattel slapped on a cardboard card, or the storylines flashing across the TV screen to create our own characters, families, dramas.

Toys were writing to me. Art, given the reams and reams we filled with characters and scenes on the blank backs of Miller Studio order tablets Dad brought home from work. And music, too. Every battle had to have its own original soundtrack.

Today, on my desk at work, close by a picture of me and three hometown buddies, on our way to kindergarten, and near a framed slogan reminding me to play, are a couple G.I. Joes I’ve had on my desk for going on 11 years now — Airborne and a Cobra Night Viper, if you must know, locked in an eternal struggle amid my stack of business cards, and dog-eared, dusty Post-It with my WebEx passwords. Transformer Hot Rod stands near the pencil and pen cup when he’s not in car mode, fixing his twin blasters on the stapler and stack of (unfiled) expense reports, when he’s not training them on my office door.

At the very edge of my desk, another G.I. Joe, sniper Lowlight, sits on a rock I retrieved from the Foutz farm of old back in Ohio, his scope and rifle and pack at his feet. Hot Rod probably steals most of his Thunder, and maybe he’s waiting for evac, but he could be pressed into sharpshooter duty whenever an irksome meeting approaches.

Sure, there’s a Rolodex blocking Hot Rod’s line of sight. And the daily folders and notebooks and Post-Its and printouts often overwhelm the call to play. But I don’t think I could navigate a single phone call or RFP or presentation or testing template or process email if the spark underneath it all got smothered. Life, itself, is a game. Is playtime. The stakes are higher now, I guess, but the energy required to dance through it still emanates from that spirit that made the old concrete walls and musty smell in that basement playroom fade and give way to the action at hand. The Story. The Art. The Music.

So, being the graying dad that I am, how can I argue with a successful formula? I want to give my kids the tools — the toys — so that they, too, can harness the power of play and make it work for them. For years and years and years ahead.

On my business trips away from home, I’m less apt to pick up a travel mug or T-shirt or pen for them than, say, a plaything imbued with the exotic, of having been carried and flown to them from afar.

No place has a higher concentration of toys with potentially transportative power than Hong Kong. And what fun it’s been to renew my search for treasure each visit.

I’d first read about Tai Yuen, or Toy Street, during my first trip to China and Hong Kong, in November 2015. But after a week navigating the bustle of Beijing’s financial district, I was bowled over by my sumptuous room at the Ritz Carlton, our conference hotel in Kowloon, and packed conference schedule aside, not inclined to cross the harbor and head into the teeming mix of people and smells and heat and color of Wan Chai.

But a return visit in March 2017 gave me a free Saturday after the usual work week alternately fighting and giving in to jet lag. If there’s anything those impromptu 5:30 p.m. bedtimes bring in Asia it’s the impetus to get up early and make a proper day of it after you’ve shaken off your foggy 12, 13 hours sleep. So I found myself in the odd position that Saturday of being up before the market even opened at 10. With ample time to find my way there through the maze of streets and plot my course of conquest.

I had expected, reading some reviews, to stumble upon an oasis of toys from my youth. Piles of GI Joes, for example, or original Transformers, a tip of the camouflage, molded plastic cap to the days when those toys were manufactured here, and not in the new mainland of China. What I found, instead, was more of a modern kid’s palace of loot — bins and bins of cheap plastic doo-dads, shelves and plastic cases full of things on wheels and feet and paws: Thomas the Tank Engine, Power Rangers, Minions, Pokemon. And distinctly Hong Kong in its bulk and bustle.

Tai Yuen street is an alley that runs about two blocks at the base of the towering skyscrapers hugging the rugged peaks at the island center. It’s lined on both sides with stands selling everything imaginable — from scarves and (fake?) watches and Japanese bobbing kitties, to foodstuffs as likely to tickle a Westerner’s fancy as turn the stomach. There are six, maybe seven toy stalls, in all — little lily pads of kid commerce in a teeming all-ages pond.

My method was to first carefully scope out each one. Hands in pockets, edging my way crab-ways through the tight aisles spilling over with toys and crawling with kids and adults both. It was a fun half-hour of surveying and savoring the variety, noting and deciphering the prices (divide by 7-ish for the exchange rate), and planning what I’d eventually return to pick and purchase from each place.

There’s a lot that’s repeated from stall to stall: scores of toy vehicles, ubiquitous cases of Pokemon cards, all the popular Legos and Transformers and Marvel superhero figurines I could likely find at home or online for less. I was after the odd and interesting, the local: Hong Kong buses and taxis and trams; (maybe) figures of local policemen and fireman and soldiers; a knock-off Chinese Lego policeman-chases-robber set that looked sturdy enough; elaborate Star Wars models to challenge the preteen in the house.

Some of the more notable things I’d only pick up here were the sealed bags of plastic toys for about $5 to $8 USD capturing uncountable iterations of novelty: basketball teams, Minions, Ninja Turtles, batmen, Star Wars figures squeezed from a mold Kenner never had anything to do with. And I appreciated the stacks and stacks of Robotech/Macross mechs that would have glued me to the floor as a ten-year-old. 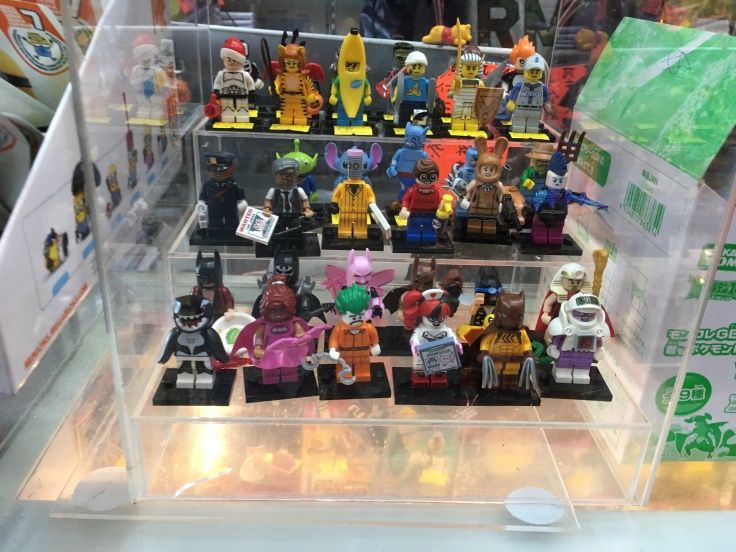 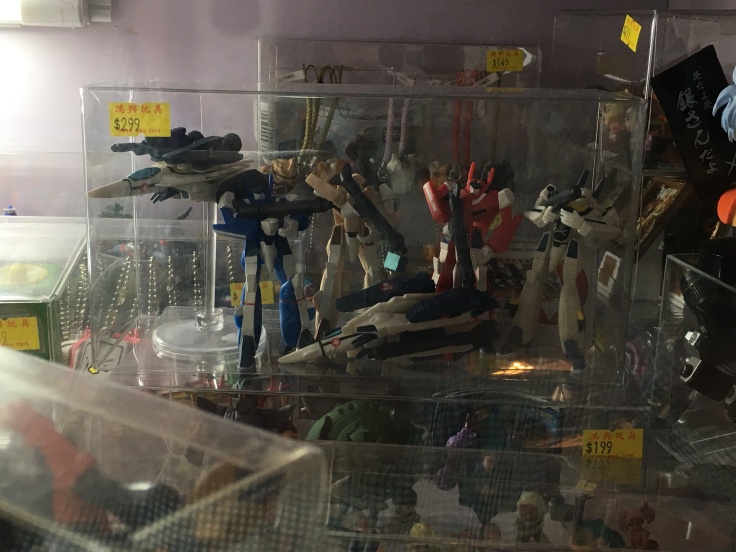 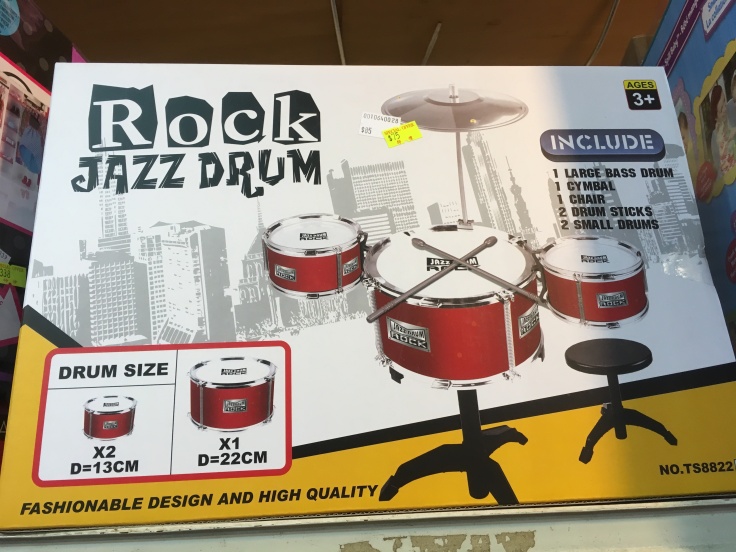 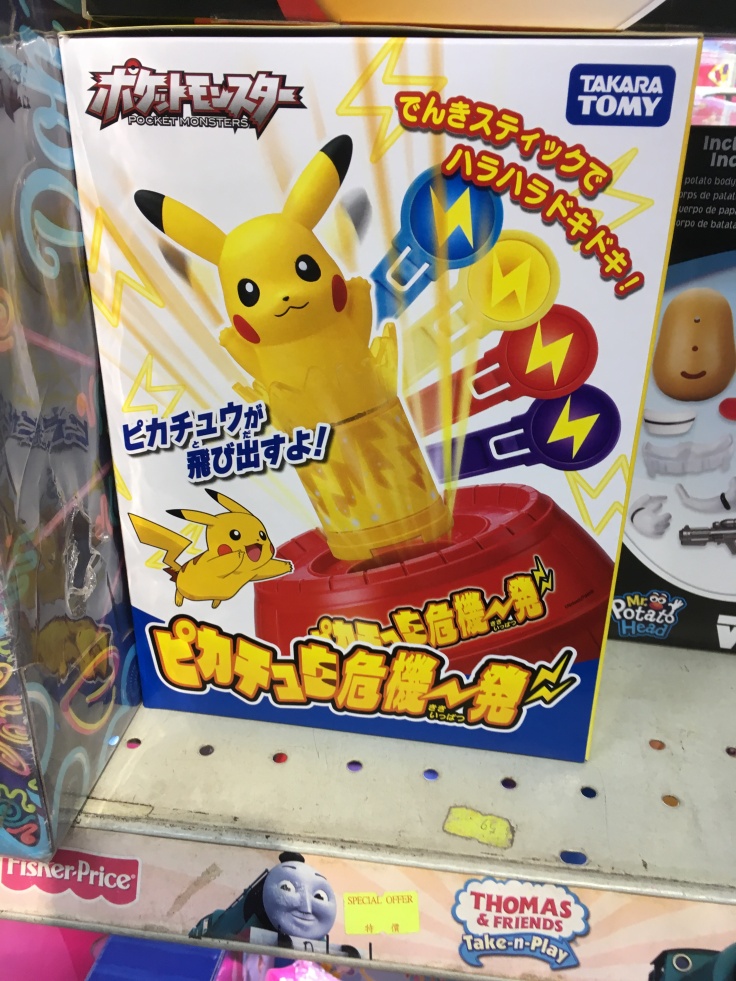 Satisfied with my careful accounting, I headed back up out of the alley into the clear Saturday air to one of the busy, wide main thoroughfares, reliable for their breathing space and for banks. It’s still something to go halfway around the world and be able to slip that ATM card in the slot, punch in a few numbers and have stacks of light green and pink paper burp out. The better to fill bags with toys.

There’s really none of the haggling over price I’d gotten inured to in China. The prices are cheap enough and I wasn’t after anything heirloom-quality. I snatched a few bags of figures for my under-tens, as well as some Hong Kong buses, taxis and trams, an authentic Pokemon pack and a Chinese-character-bedecked variant, a C3PO model intricate enough to demand hours of concentration, that knockoff Lego set, oh, and a brand-spanking-bright Hot Rod transformer for Dad.

The big score was a giant plush Charmander dangling from the ceiling that I almost missed for all the distracting treasure on lower shelves. This guy had been topmost on my (then) eight-year-old’s Christmas list and I practically heard a chorus of angels cry out when I banged my head on his orange, flaming tail. That, or the Pokemon theme song.

But most of the loot in the stores was never going to be circled in a (then) Toys ‘R Us catalog, or pined for over current TV commercials. And that’s a huge part of the charm: you don’t venture into Tai Yuen street on a Christmas or Birthday mission. You wander in with the spirit of a kid — or tugging along a carload of them with — and you allow your eyes to light up and glaze over at turns as you dazzle in the spectacle of at least this small stretch of real estate thrown up in thrall to that magical word: PLAY.

And then you squeeze and slide back down the alley the way you came in, squinting at the sudden sunlight and the rush of a much faster pace on the sidewalks and streets beyond. Back in the press of the real world. But a trinket or ten richer. Because even thousands of miles away, in the thick of an endless conference call, or on the sprawl of your carpet at home, you can send a wobbly plastic Turtle charging, or train Hot Rod’s blasters on the chirping phone, and remember.

One thought on “Achievement Unlocked: Toy Shopping in Hong Kong”