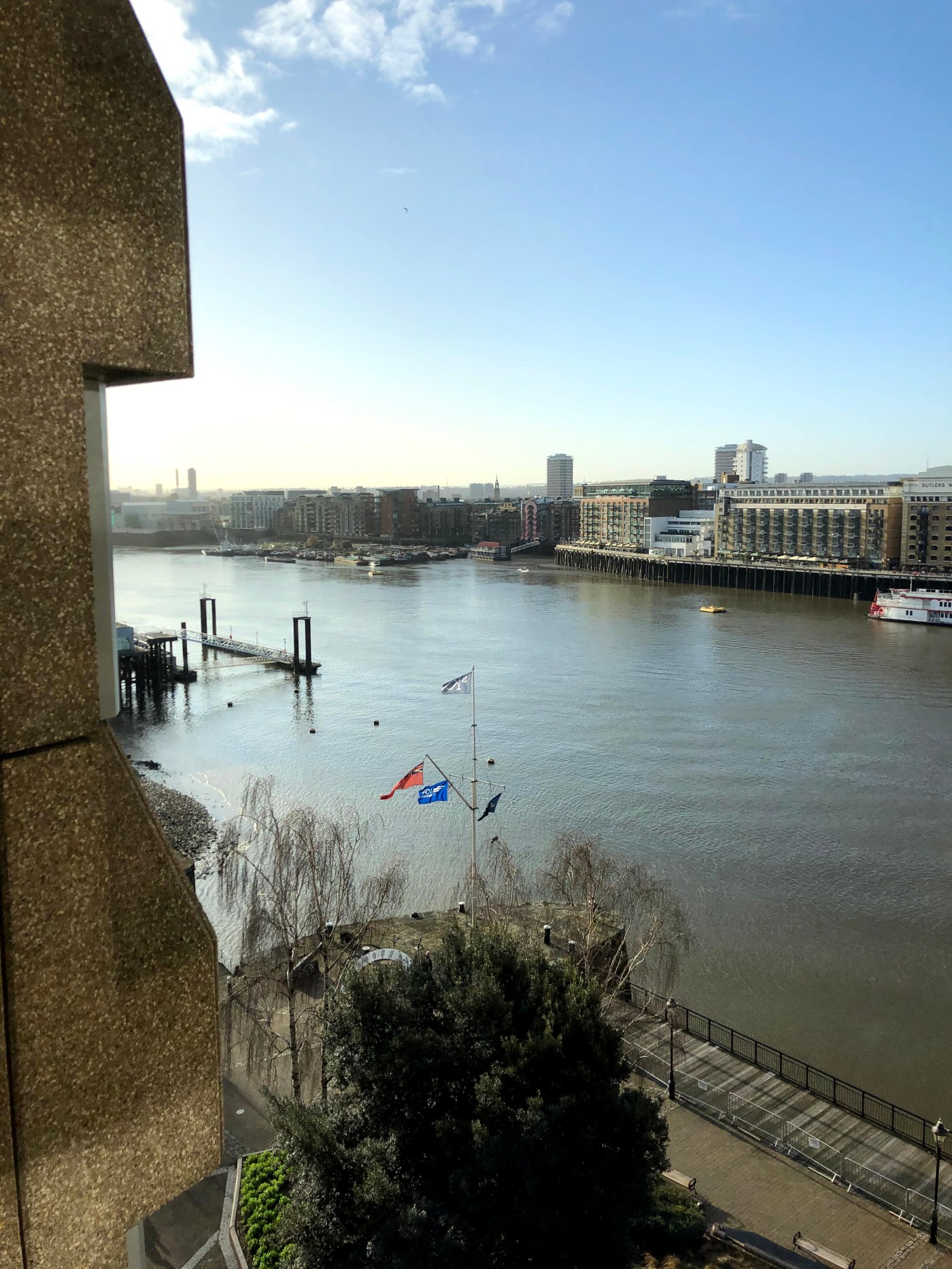 Sunshine on the Thames – Dad About Town

In my job I am blessed to be able to spend a few days or, at times, a week or more working from locales considerably far flung from my usual Midwestern town commute.

As travel restrictions tighten — rightly so — in the wake of the Corona Virus pandemic, I’ll remind myself of that. And look forward to my opportunities to hit the road again.

This past week, though the clouds of uncertainty darkened around the world, my own mood was considerably lightened by time in London and Amsterdam, and the beautiful, characteristic scenery of the neighborhoods I stayed and worked in.

I led off the week, bleary-eyed Sunday morning, depositing my jetlagged self at a hotel where I’d never stayed: the Tower Hotel, situated just where you might think, on the banks of the Thames overlooking the Tower of London castle and historic Tower Bridge.

I’ve written before about things a good hotel room must have to make my stay one free of grumbles. But this post’s not about that. (More to say soon.)

No, this entry endeavors to capture the jolt of energy I feel when landing in a new place, charting a course through the unknown, and feeling, after a period of adjustment, even a smidge of what it’s like to be a local. To be part of the everyday crowd.

I’ll See Your Tram Ride & Raise You a CASTLE

My United App currently reports my standing at about 211,000 miles and counting, so I’ve hit a few hubs along the way.

I’ve got a pretty tidy plan, upon landing at an international stop. It goes something like: Find Baggage Claim, Hit Restrooms (while bags are still coming), Pick up Bag, Currency Exchange, Taxi.

Contrary to what we see even traveling domestically in America, I can get out of the airport in London, or Shanghai, or Hong Kong, even Beijing, within 10 minutes, if I managed to snag a seat toward the front of my plane (frequent flyer status helps).

And once I’m snugly ensconced in my home digs for the week, I look ahead to the workday logistics: where is the office again? How do I get there? By when?

One of my first professional work trips was to cover the 2004 Republican National Convention in New York. This was in my budget, suburban Chicago newspaper reporter days, and so I did not stay in the posh quarters reserved for the Illinois delegation. No. I camped in Newark, first took the hotel shuttle to the airport, then the airport train into the city, then disembarking at Grand Central to walk my sensible shoes up Broadway to grab coffee and a McMuffin at the Times Square McDonald’s, soon after joining my local senators and congressmen and city and county reps at their hotel buffet, where I declined to partake in anything but their choice words.

“You don’t make very much, do you?” one wizened crone of a city rep once sweetly purred at me.

No — but I do find my benefits where I can.

I loved that daily commute, for all its mileage. Waking up as the city woke up. Sampling its rhythms and colors. Its smells. Had its own groove, and I bobbed right along.

Same goes for when I’m in Hong Kong, visiting our office in washed-out, bottle-strewn, red-light Wan Chai. I step out of the hotel and move through the cooking smells, the food markets, the garbage on the streets, the rhythmic blaring of the crossing signal to camp out across the street and sample a yogurt, croissant, and big, steaming mocha before riding up into the teen floors.

In New York, these days, it’s Uber city. Plug in the digits to the conference convention center, the client meeting, the after-work meet-up spot. Pull my eyes up from my phone long enough to study the packs of dull-coated Manhattanites, even if they aren’t Manhattanites, really, just in for the long day. Fix one shoulder and elbow into the door frame to brace myself for the inevitable honking, swerving lurch around the backed-up traffic as we rocket across the intersection and wind on our way.

Singapore was all about not melting before arriving at the office. Much like Miami, in the morning.

Milwaukee was a bent-over, headlong, knee-churning rush into the knife’s-edge of the wind. And the first time I downloaded Uber, incidentally, for the end-of-day commute. Lesson learned.

London three years ago, the first time I visited, found myself at the company apartment in Shoreditch. Reveling in nights with the windows open, traffic passing like waves beneath the sills, the cool breezes sending me shivering beneath the big down comforter. The smells from the communal fridge… not so savory. But knowing I could wake up and be out the door and onto the double-decker bus at the stop right across the street and bump my way down to the office in Whitechapel made me feel that local affinity again. That sense of knowing where I was. Doing all right.

This week I had a new course to plot. Google Maps is the handy companion. Plugged in the old office address in Whitechapel. Stepped outside the hotel for a clap down the riverside cobbles. Gaze up — what, ho! Why, that’s Tower Bridge. Wind under, and there’s the Tower of London and its stony turrets, the great expanse of lush green grass marking the ancient moat. Up stairs, and around stairs, and under stairs, then up again and I’m at the Tower Hill stop on the Underground. Grab my Oyster card, scan my way in, check the colorful, tubey map, like a playground for hamsters, and I’m only up one stop to Aldgate East, Aldgate Station if I’m crafty, where I can stop at the coffee shop right outside the doors, grab a large brew and step a half block to the office.

There is much I’ll miss in the coming weeks about travel. Hugging or, lately, elbow-bumping colleagues. The energy of our other offices. The whiff of the uncommon. Even the press of airports. OK. Not that. Shaking free of the dust of home for a bit, which always makes it all the more sweeter to come back.

I’m writing this with minutes until I board my flight home, through Chicago, where there is uncertainty, and even panic in this new reality we find ourselves thrust in. But I also see something sweeter. And it’s a call to our better natures. To be compassionate. To be understanding of others, and our own common frailty. That’s a sense I feel I’ve been fortunate enough to develop, in my traveling. To step onto the paths others walk, every day. You’re never quite the same. And you’re quite better for it.