Flavorful Red Sauce in a Rush

I’ve given all due credit and homage to my parents as kitchen tinkerers extraordinaire. My fundamental view of cooking is less about temperature and time and more about messing with ingredients. If you didn’t mix ’em up a bit, add something new, did you really cook?

As long as the secret ingredient is still love.

Mom and Dad brought this culinary jazz to their own creations, sure. Like my dad’s homemade meatballs or varieties of (inedible to a grade school kid) black bean and split pea soups, etc. etc. etc. And in the ways they tinkered and tinkered in emulation of their favorite dishes until nailing it: Sky Line Chili being the prime example.

And you could say that recipe is still in flux, still being perfected some 35 years going.

Heck, they couldn’t even leave the pre-packaged stuff alone. These guys — my beloved parents — added vegetables to frozen pot pies. And they never ran into jars of spaghetti sauce — Ragu, when we were less savvy; Prego when we learned better — that couldn’t be modified with a bay leaf, or ground beef, or a dash of cumin or red pepper.

This is the type of improvisation that comes in handy on the nights when you’ve got 2 to 4 kids shooting off in myriad directions and barely time enough to open the fridge, let alone set about crafting a sauce from scratch.

Small wonder, then, that when my wife and I were first starting out, post-college, we were more likely to whip up Spaghetti O’s or give a canned sauce just enough time to heat up before serving. (Shudder.) Even though we had the time, then, to labor over a recipe, we didn’t have an audience of critics to please. When you’re cooking for yourself, alone, Spaghetti O’s with meatballs and English muffin toaster oven garlic bread don’t sound all that bad. (Shudder.)

But eventually, we started cooking for each other. And that’s when my descendant-of-tinkerers impulses kicked in, particularly around red sauce. There’s something about a jar of Prego when poured out, sitting there all flat and Crayola red in the pot, that just begs to have interesting stuff done with it.

Eventually, that “stuff” became a sort of recipe. It’s not as fancy as, say, my homemade chili soup, or Sky Line Chili, or ritual dances I do around a pork loin on New Year’s Eve. But it’s more than that jar of Prego deserves. And downright delicious, if I may say so myself.

For a time, I flattered myself that this was my own version of the legendary pasta puttanesca — or, whore’s sauce. Said to be a specialty dish of Naples, puttanesca was either a sauce made by ladies of the night to lure customers in from the streets, or a quick dish Naples house wives whipped up before their husbands came home after lazing away the day in the arms of their lovers.

The idea is the same: throw a bunch of piquant ingredients into a hasty brew, give it a few stirs, and pour it over pasta. But the execution, turns out, is pretty specific when surveying the puttanesca recipe cards of, say, Emeril or Rachael Ray. I love the prominence of anchovies and olives — something my family may or may not agree with. The dish actually bears some resemblance to my Welsh Weible ancestors’ baked spaghetti. And breaks one of my cardinal (albeit, German/Swiss, so take that with a grain of minced garlic) rules of pasta which is not to mix the pasta in with the sauce. At least until there are leftovers!

And there will be leftovers.

So call this Colt’s Everything But the Kitchen Sink, modified Prego pasta sauce. Give it a spare hour, throw in some love (always the secret ingredient) and enjoy! 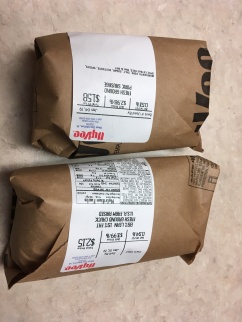 1. Brown the Beef… and Sausage

What’s an easy way to amp up that lame canned red sauce? Add meat! In this case, two kinds.

I get about a half pound each, give or take, of ground beef and ground mild Italian sausage cut at the grocery store. I preheat a medium sauce pan (or go large, since later you’re going to add a bunch of other stuff) just a little, and coat the bottom with olive oil.

Then, I get the pot going with both meats and tend to it as I move to the next step. 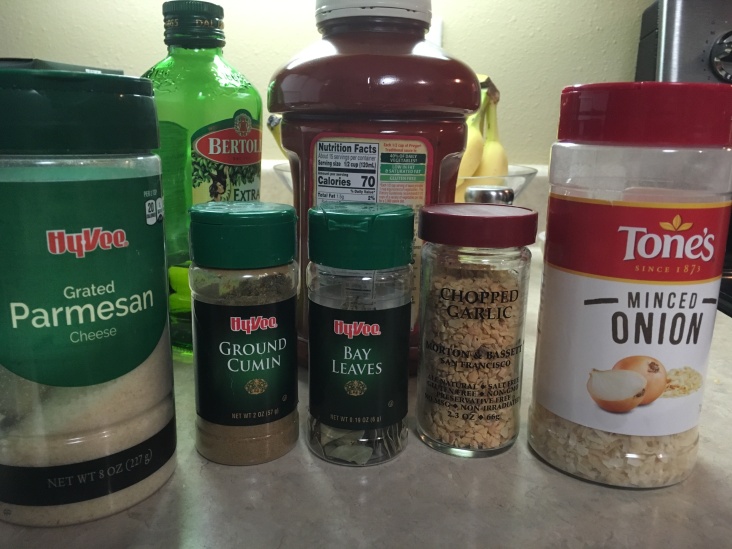 When I didn’t have ground beef or sausage around to enliven ordinary sauce, I often raided the fridge for whatever was in there. Celery, carrots, peppers, mushrooms, leftover grilled brats or burgers: all are welcome in the mix.

But when I’ve got the ingredients on hand, I’ll usually add the mild flavor and crunchy texture of some carrots and celery. You’ll find that, along with onion, in Bolognese sauce, though we’re not going to any deliberate length to saute a proper soffritto. But it’s a similar principal: enliven the sauce. Though in this case our ragout isn’t false, it’s stacked with both meat and veggies.

Since the theme here is also convenience and speed, we’re raiding the spice rack for minced garlic, and chopped onions, a dash of cumin and a sprinkle of salt for the next step. 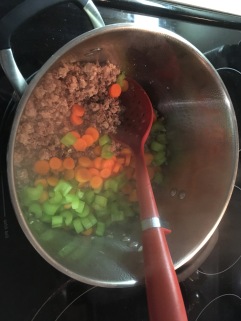 I like to simmer my meats and veggies with a dash of cumin and salt and a sprinkle of chopped onion. There’s usually a bit of olive oil still on the bottom of the pot and by then the grease is working a bit, too.

If things are getting a bit funky in the pot, you can strain the grease before adding the veggies and spices, and maybe a drop or two more of olive oil.

The goal is to get it all mixed up and delicious, tenderize those veggies. Our own, finer base, a la soffritto, for that store-bought sauce.

By now I’ll have lowered the heat, gradually, for the 15 or so minutes the mixture’s been browning, and it’s time to add the sauce, on low to medium heat. 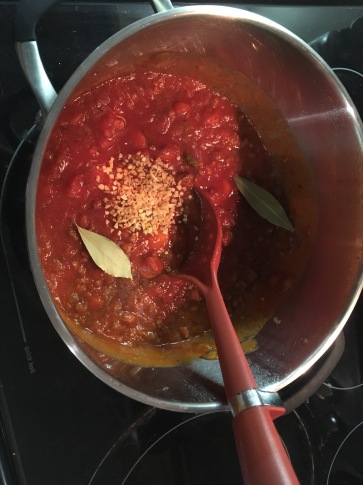 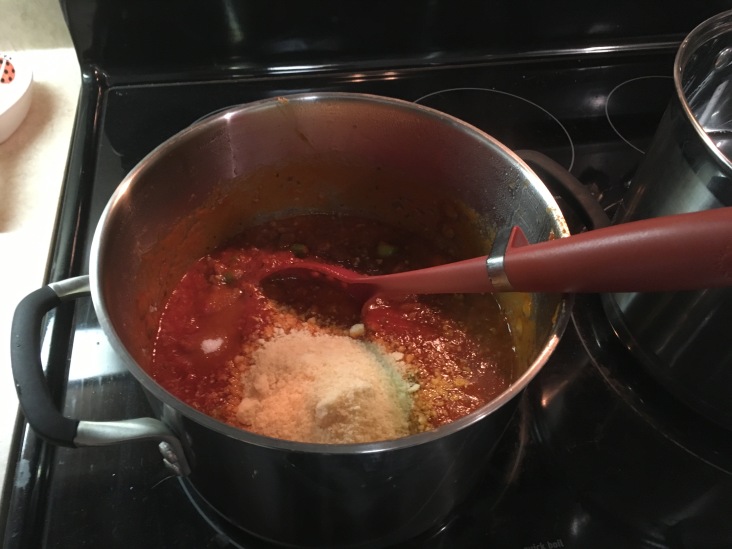 As I bring the sauce to not quite a rolling boil but a bubbling simmer, I add more flavor in this order:

Bay Leaves — 1 to 2 is plenty. We used to have a game of finding the bay leaf in our spaghetti, growing up.

Minced Garlic — about a teaspoon. No need to ruin kisses for days, but definitely something the bland canned sauce could use a bit more of.

Spoonful of Sugar — yes, Mary Poppins had it right. A trick in homemade tomato sauces to balance out the acidity and sweetness, I’d never heard of this before I borrowed from several recipes to concoct my own version of (from scratch) Italian Sunday Gravy. This sauce ain’t that, but hey, why not. Throw it in.

Grated Parmesan Cheese — We used to cry bloody tomato sauce when my parents would dump the remaining Parmesan in their pots and we couldn’t sprinkle it on our plates, ourselves. But they had the right idea. About a tablespoon or two thickens things up nicely and softens the color to a satisfying orange.

I let this whole thing work, ideally, for the better part of an hour, bringing the temperature down to the lowest setting and stirring frequently. 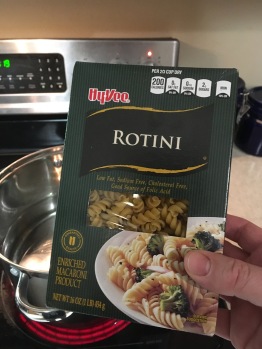 Since this is meant to be a fun, spontaneous way of whipping up a pasta meal, I usually go back to my parents’ old standard of rotini spiral noodles, the better to trap in that flavorful sauce.

And what goes better with weeknight pasta than some chunky, Texas Toast garlic bread?

I start the oven preheating to 375 degrees about the same time the water is boiling in the big pot. I add a dash of salt there, force of habit. Whether it brings anything to a faster boil, or keeps the noodles from sticking, who knows? Sometimes it’s the ritual of the thing.

The noodles usually take about 10 minutes, and the bread — the package claims — five, but I like a crispier garlic toast, so vary it up as you will.

I always — always, always — advocate running your cooked pasta under cold water in the colander, though. Nothing ruins “jazz spaghetti” like your al dente rotini turning to “”all gloppo”paste under that hot sauce.

Once the bread’s out of the oven, I dish up spaghetti right at the range, same as my parents did, spooning generous amounts of sauce atop the noodles so you don’t leave any of the pasta uncovered and probably have enough leftover to dip your bread in.

If that doesn’t make for a great weeknight meal in the midst of the rush to scouts, piano lessons, soccer practice, what-have-you, well: throw in your own ingredients and change it up to your tastes.

Just make sure: the secret ingredient is always love. 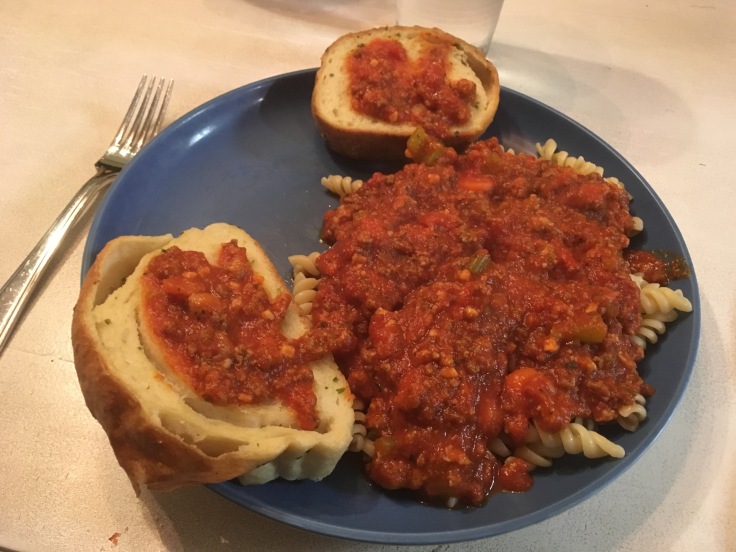 One thought on “Dad’s Kitchen Sink Spaghetti – The Right Way”