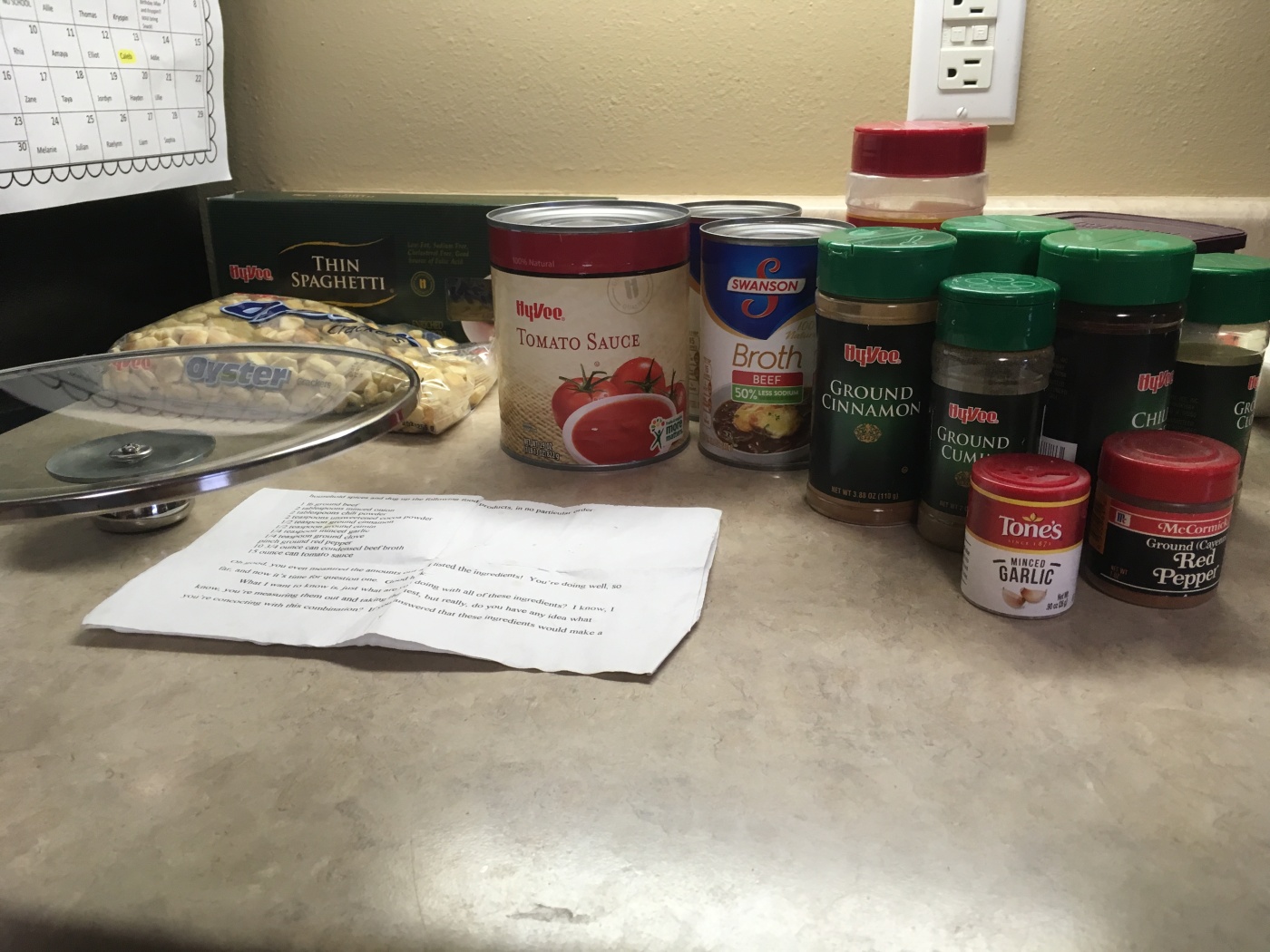 Making the World Safe for My Father’s Chili

On this post-Thanksgiving, football-rich weekend, let’s throw back to a column I wrote in 2008 to capture one of my family’s culinary obsessions: Cincinnati-style chili spaghetti. Be sure to read to the end for the recipe.

This article originally appeared in the Youngstown Vindicator on Feb. 27, 2008:

I believe a man is only as good as his meatballs.

From our earliest days as a species, when chucking spears at the nearest saber-toothed mammal took the place of, say, chucking spent beer cans at the TV after another Rex Grossman interception, there has been a primal connection between guys and food.

Tom Hanks, in Castaway, knows what I mean. “I have made fire!” he roars. The scene left on the cutting room floor is from the next moment, when Tom, weeping, realizes there’s no good flank stank for a thousand or so miles. Somehow, a grilled Wilson volleyball doesn’t go as well with fermented coconut juice.

Simply put, real men cook. It’s a philosophy I’ve inherited from my father, who spent years slinging meals for my brothers and me while Mom worked evenings.

Dad conjured recipes by trial and error. If not, we might still be sucking down Dinty More beef stew with bread, butter and jam.

We ate what he liked: the fried eggs and corned beef hash he shoveled in on business trips; split pea and black bean soups; burgers and brats from the grill; and – until his taste buds unionized and formed a picket – liver and onions.

Usually, our favorite dishes were ones he improvised. Throwing together macaroni, green peppers, onions and hamburger, smothered with ketchup – he called it slum goulion. Or the way he made sloppy Joes – with hamburger, a can of gumbo, a couple spoonfuls of minced onion, ample squirts of ketchup, mustard, and the secret ingredient: love.

Love made the inevitable burnt offerings go down a little easier. Dad’s most ambitious project involved replicating the chili-spaghetti he craved as a student at the University of Cincinnati. You can’t walk a block in the southern Ohio city without stumbling upon a parlor serving up a spicy-sweet sauce over pasta, topped with mountains of shredded cheddar. But Dad’s favorite version, Sky Line, had him stumped.

Life as a guinea pig grew gastronomically complex as Dad tried deer meat, ground salami, even chili soup over rotini to unlock the secret flavor combination. My brothers and I made indignant faces and reached for the oyster crackers.

The likely savior emerged – a woman with a printed recipe. Grandma clipped and sent instructions for Cincinnati Three-Way Chili from Arizona Trailways magazine, Dad made minute adjustments, and the meal became a favorite.

We soon had to make birthday dinner requests at least 72 hours in advance – time to stock the spice rack, simmer the sauce all day, set it out overnight, skim the grease in the morning and give the pot an extra stir before achieving Sky Line nirvana.

Eventually, it was time for me to outgrow Ramen meals and dishing up Spaghetti O’s with frozen French bread pizza to college girlfriends, and take a crack at Dad’s recipes.

In the male tradition, my cooking has involved hardly any guidance of the frilly, wedding-shower recipe card variety. It’s nearly all improvisation. What can I say, ladies? We’re men; we like to tinker.

But as much as certain culinary customs are seared into my genes – Dad’s boiling brats in beer before grilling; his opera singing while fashioning meatballs (“I-a make the meat-a ball!”) – my own cooking has involved breaking with paternal tradition.

My bratwurst, for example, receives a generous basting of “Three B’s” – beer, butter and barbecue sauce – while plumping over the charcoal flames, a practice that has Dad shaking his head. And I always serve them in garlic-toasted buns. Unlike my grandfather, who erected an elaborate cage over his grill to roast barbecued chicken, only to blacken it to the consistency of shoe leather, I hold off basting birds until the end. And though I appreciate my father-in-law Gary’s grilled delicacies, resorting to propane seems too much like cheating.

As for my father’s Sky Line, it’s a staple. I’ve got a dedicated stew pot for it at home. Unfortunately, the variety of ingredients in its creation – garlic, cumin, clove, cinnamon and cocoa, anyone? – are exceeded lately only by the number of stomach gyrations concluding every serving. So I halve a tablespoon here, decline to double there. Is it the same chili? Well, maybe not. But it’s mine.

So, while I want to tutor my own son, counsel him to build up a tolerance to garlic salt early, maybe I’ll hang back a bit. Let him stand at my elbow as I work the spatula, glean whatever tricks of technique he can, and then tinker away.

After all, the secret ingredient is still love.

Love… and a heaping helping of spices

OK. Do try this at home. Just do so with respect for the years of trial and error that went into its perfection.

And don’t be shy in adding your own tested variations.

The above makes a single batch. If you double or even triple the batch, ease up on the spices. You probably won’t double or triple those.

To begin, grab a good-size stew pot and brown your ground beef over medium to high heat.

Once the ground beef is browned, strain the grease. Return the pot to low heat. Next, add minced onion and cumin. Stir.

With the beef seasoned up a touch, it’s time to add tomato sauce and beef broth. Stir.

I prefer, according to family tradition, Contadina tomato sauce and College Inn beef broth, if you can get it.

The next phase is a series of add-and-stirs: add minced garlic, chili powder, cocoa, cinnamon and ground clove. Stir it in. Finish with a pinch of ground red pepper.

Each batch is bound to pick up its own flavor by slight variations to the above spices. Spicier? Even an extra dusting of chili powder or red pepper (or both), can dial it up a notch. Sweet? Cocoa and cinnamon can tone it down, according to your palette.

I try to keep things as balanced as I can, and go light on the spice, knowing the Scandinavian disposition of most of my family up here. Besides? What’s the use of heartburn when you want seconds (and thirds)?

Once you’ve got all the inherent goodness of half a spice rack stirred in, it’s time to patiently let everything simmer and cook for a good 2 to 3 hours, 4 or 5 if you’ve got the time, keeping things on low and stirring every once in awhile.

The sauce may reduce a bit, but it’s OK to keep it saucy. It’s not supposed to be soupy, however. And if you’ve got to turn up the head to get it thicker, go for it. That shouldn’t be a problem, though, with the recipe as laid out. If you’re nervous, use a slotted spoon to serve up this goodness nice and thick.

About 20 minutes or so before ringing the chili bell, bring a pot of water to a boil, and start a smaller pot boiling for your hot dogs. Sky Line isn’t Sky Line without a side (or a few) of cheese coneys. As for the pasta, I’m equally enamored with classic thin spaghetti as I am with spiral rotini — it’s your call.

Have a good four to five cups of finely shredded cheddar on hand and when serving it up, pile it high. The usual layering order is pasta, sauce, cheese for a three-way win (we won’t discuss five-way iterations with onions and beans), but if you want to go inverted, try noodles, cheese, sauce, or whatever combination floats your boat.

Serve with that cheese coney, and your favorite cold beer. Don’t forget the love.

5 thoughts on “Steppin’ Back Sunday: Sky Line Chili, Get Into My Belly!”