An Ohioan’s Take on “Chili Soup”

The first Super Bowl I remember was the post-1984 season clash between the Dan-Marino-led Miami Dolphins and Joe Montana’s San Francisco 49ers.

It’s funny: You do a search in Google for 1984 Super Bowl and you get the date-accurate battle between the Raiders and Redskins. Marcus Allen’s big MVP game. But you search for 1985 Super Bowl and the whole Bears juggernaut of that season pushes down any mention of Marino’s lone shot at a title.

And by then, I was fully on the Bears bandwagon, too, a full year away from the Bernie Kosar lovefest-turned-to-heartache with my Cleveland Browns.

Uncorrupted, shall we say.

But the first game I really remember was Super Bowl XIX. Fire going in my grandpa Ley’s basement rec room. Rolling around the thick carpeted floor. And chugging down about four bowls of chili soup.

My real recollection of that winter staple begins with that Super Bowl, too.

For a time the stuff was inedible to my younger brother, Dan, and me. Till we discovered the secret: mashing a stack of Saltine crackers and stirring them in until the whole bowl was basically the consistency of gloppy dough. We called it pizza. It spared us the overload on our childish taste buds and considerable hours sentenced to finishing it at the table.

My palette has matured since.

A few years into adulthood, I went back to mom and dad in the effort to assemble the true list of ingredients needed to whip up my own batches of “chili soup,” so called because any Ohioan acquainted with that Cincinnati staple of “chili-spaghetti” has to make the necessary distinction. And I asked: who came up with this particular recipe?

The answer was complicated, much like the brew of meat and veggies and spice and broth that gets spooned into every bowl. Some of the credit goes to Grandma Ley, some to Grandma Foutz. A heaping ladle full, as well, to Mom and Dad. And Sam, my 10-years-younger brother, claims at least the innovation of mixing in Italian sausage and red bell peppers.

Heading the recipe card? “Everybody’s Chili.” It fits. And is particularly suited for a Super Bowl or any brisk fall or winter day. I like to serve mine with a baked loaf or two of sour dough bread. And though I don’t mash stacks of Saltines in it any more (pizza is pizza, and we get far more than our share of that), I do like to have sour cream and finely grated cheddar on hand.

Everybody’s Chili – What Goes In

1 to 2 lbs. ground beef — or substitute half beef, half ground Italian sausage

1 large can tomato paste, plus water in can

1 large can diced tomatoes, plus water in can

1 large can of dark red kidney beans, plus water in can

1 large can of mild red kidney beans, plus water in can

I start the big chili pot on medium-high heat and throw ’em both in there. I still mourn the death of my battle-scarred, sturdy white chili spoon, but for sanitary reasons, putting the hard red spatula into service for browning the meat and reserving a red slotted spoon for later stirring is probably more sanitary.

Brown the meat in its own juices and drain the grease when done.

2. Dice onion and add to pot

Our cutting boards have also seen some heavy usage, but I don’t mind pulling them out for multiple vegetables. Always better with them fresh.

Dice your onions to your preference, then stir them in with the browned beef on medium to low heat. 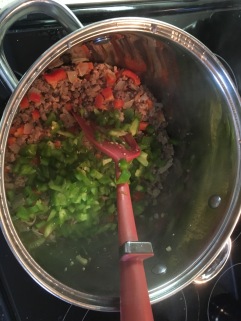 Sam’s vote for green and red peppers also gets my endorsement. Not only do I keep my knives sharp and happy, but they make for a colorful pot when added to the beef and onions. Christmas chili!

Now’s a great time to add the dash of salt and cumin. Your kitchen’s about to smell good. 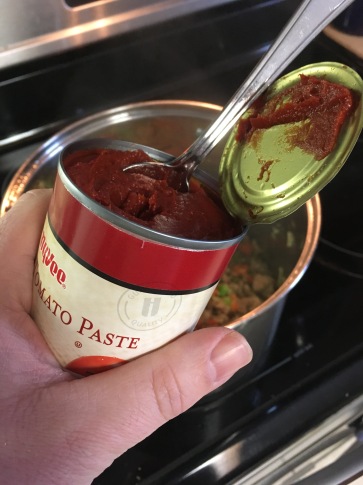 4. Add tomato paste and water in can

It’s a pain to scrape out every last morsel of tomato paste, but it’s worth it.

Get in there with your spoon and glop it on top of the simmering beef, onions and peppers.

Then follow the method of my Dad — and likely, my grandmothers before him — and give the empty can a good rinse with tapwater. Don’t dump that water — carry the can back to the pot and stir it in. 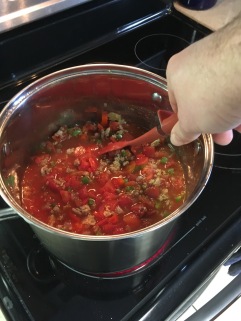 5. Add diced tomatoes, water in can

You’re fully in the water in can phase, repeating it with the diced tomatoes and next, the contrasting kidney beans, dark red and light red.

Unless you’ve got most of a day to simmer off all that water, I suggest you follow closely Dad’s tip to just give the cans a rinse — don’t fill them to the brim and dump a heap of water in. Just enough to get that broth going.

In my most recent batch, I couldn’t really find the giant cans of kidney beans at my store. But then, most everybody in my family is fine with easing back on what I consider a staple.

So I added black beans for fun. You can’t really tell the difference in the end mix.

All the same, the method holds: dump, rinse, stir. 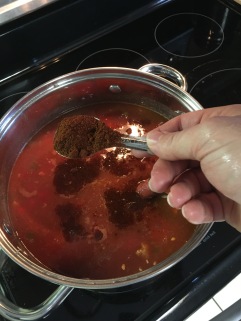 True to most Foutz concoctions, I don’t necessarily follow the stated recipe too explicitly.

But unlike our chili-spaghetti dish, you won’t need to double or triple the portions here and adjust the spice quantity downward. This will make a good 10-12 bowls.

So I just up a little here, cut a smidge there. I like a little more garlic, tight control on the chili powder portion, and a little less sugar. 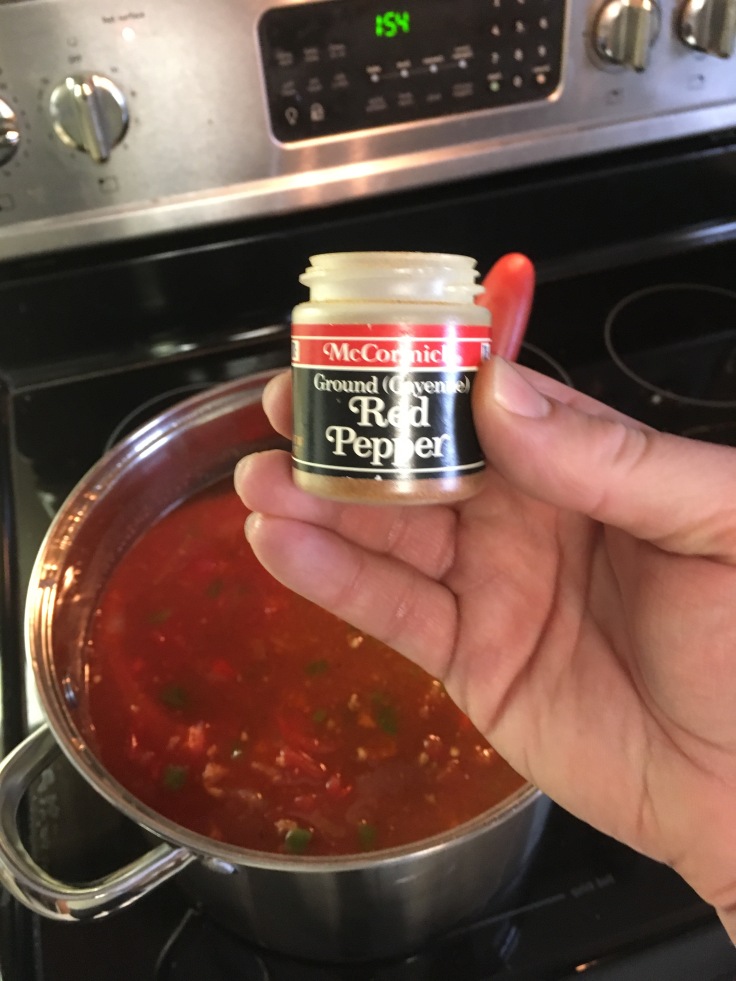 8. Mind that pinch of red pepper

Just like that finishing dash or two of spicy red pepper in Sky Line Chili, the difference between palatable and painful for the rest of your family could come down to how zealous you are here.

This isn’t meant to be five-alarm chili.

We Ohioans familiar with Cincinnati-style chili-spaghetti make the necessary distinction between that dish and “chili soup.” Both are delicious, and apt to be different with every batch. 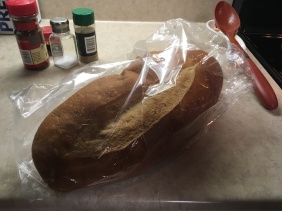 Now it’s time to let the magic work, setting the pot to simmering for the better part of an afternoon, giving it a stir every so often.

I don’t need much more than the very lowest setting of heat after bringing the brew to an initial rolling boil, if I even get it up that high. You’ve got hours to let the mixture work, and it will be plenty piping hot by the time it hits your bowl.

About a half hour before dinnertime, I throw a take-and-bake loaf in the oven, or a twin pack of sour dough baguettes. I serve these cut and steaming in a cloth-napkin-draped salad bowl, and set out butter and sour cream and cheddar cheese to mix in.

Goes great with a beer, and whatever autumn or winter can throw at you. Enjoy! 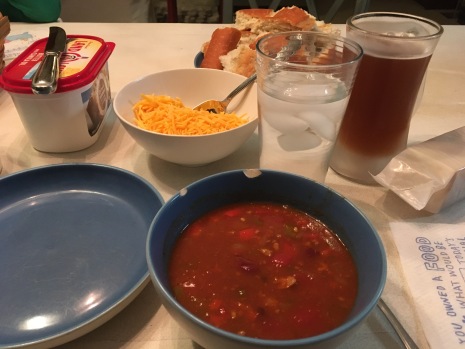 One thought on “Everybody’s Chili – The Right Way”